Hello, Thursday Morning readers! It’s been a couple of weeks since my last post. I’ve been busy!

On Father’s Day, my husband wanted to go for a walk after church services. We opted to drive a few minutes and hike in a nearby park because it’s so much more relaxing than walking in our subdivision.

It was beautiful. I kept stopping to snap pics of wildflowers. They reminded me of my childhood when we wandered the fields around my grandma’s farm. 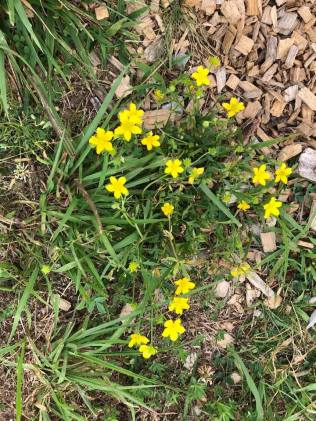 We’d planned to walk about a mile-and-a-half. However, we made a wrong turn somewhere along the way and ended up on a three-mile trail. That was not so terrible, except for the approach of dark clouds and the ominous rumble of thunder in the distance. 😦

Pulling up GPS on my phone, I determined that we were still half an hour from our parking spot when the wind started whipping around. We increased our speed, which concerned me a little because my husband has health problems. So, I prayed (I may have begged) for God’s help.

Minutes later, as raindrops began to pelt us, we topped a long hill and found a pavilion where we could take cover. A bike rider had also taken cover there. After a few minutes of watching the rain fall in sheets and lightning striking all around, the bike rider struck up a conversation with my husband. He gave us advice on the shortest route to take to get back to our car.

My husband asked lots of questions (as he usually does) and found out where the guy likes to ride. He showed us photos he’d taken in some remote areas around the county. As the rain began to subside, he decided to call it a day. He was parked nearby, so he offered us a ride to our car (by foot, still over a mile from our present location).

My husband happily accepted. We were in the guy’s vehicle by the time I remembered the prayer I’d prayed. I whispered a thank-you to my Heavenly Father. Either He’d had mercy on our foolishness and lack of planning, or, we had met someone we needed to meet and given a stranger the opportunity to do a good deed.

Sometimes, it’s difficult to accept help, especially if the offer comes from someone you don’t really know. Have you ever given a stranger an opportunity to do a good deed?

Hello, Thursday Morning readers! I am running late today, but it is still morning, and I’m enjoying a second cup of my favorite brew.

I completely missed last week’s post. That holiday threw me off! My last post, I promised more family history. In searching through old photos, I discovered cowboys. You’ll find that post here. The Packnett family intrigued me with their good looks and interesting lineage.

In Family History, I talked about the Youngers and the Christys. Long before my grandmother, Audrie Packnett met and married my grandpa, Henry Earl Christy, Minnie Younger married William Henry Christy. Minnie and Willie Christy both came from pioneer stock. Their families had traveled west and ended up in Arkansas and Missouri.

William Henry Christy II was born Nov. 2, 1886, in Arkansas. He died at the young age of 54, in Amarillo, Texas, and was buried in the family’s hometown of Henryetta Oklahoma.

Willie and Minnie had four sons. Twins, Floyd & Lloyd, Henry Earl, and Elton. I think the twins look like double trouble. Kind of like Dennis the Menace times two. My grandpa, Henry Earl, is in the center of this photo. His younger brother Elton stands in front of him. My grownup Grandpa looked a lot like his daddy.

The first time I saw this photo, I was confused. I wondered what my younger brother was doing in such an old photograph. He looks an awful lot like Willie Christy.

The twins moved to Amarillo, where they spent their lives working for the railroad. They were seldom on the same train at the same time. But in 1968, they were. The train derailed, killing Uncle Lloyd. Uncle Floyd was injured but survived. He died in 1996 at the age of 85.

Great-Grandma Christy was a widow at 51. Eight years later, she married Parker George White, the widower of her sister, Lissie, in California. My Grandpa (Henry), would later move to California. I assume he didn’t like the weather in Seattle, Washington, where he’d been living with my Grandma and his two daughters, my Aunt Earlene and Mom. Grandma had no intention of ever going south again, where there was any possibility of dust storms. She remained in Seattle with her daughters. 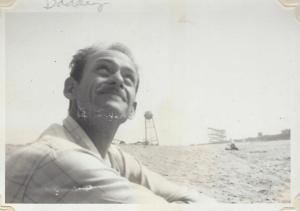 I think he resembles Walt Disney in this photo. I wonder how he felt, starting over without his family. Whatever the reasons, his daughters forgave him and had a very good relationship with him. 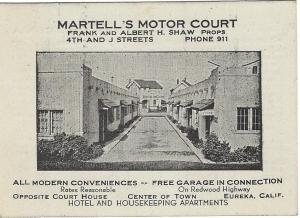 I found this little card among his old photographs. I think he lived here at one time.

He and Audrie eventually divorced, and both remarried. Grandpa would live his last years in various trailer parks.

The Christy brothers are in the first photo. Second photo: Lloyd and Floyd, all duded up for some occasion, then pictured with their wives in the third photo. The fourth photo is of their mother, my Great-Grandma, (right in the photo). I always knew her as Grandma Christy, though she was officially Minnie White.

I didn’t know my Grandpa Christy very well. He and Viola (we never called her anything else) lived in L.A., and we lived in West Tennessee, with the exception of a few years in San Diego. My fondest memories of him included things like visiting a “swap meet” at a drive-in movie theatre (during the daytime) and riding in the back of his VW. He was always smiling, and always had a dog. He loved baseball (Dodgers) and the roller derby, and he loved to cook.