Are you a writer? Then you’ve known great moments of joy and dark moments of despair. 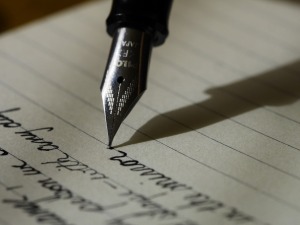 What is it about writing that is so therapeutic? In ages past, folks spent hours physically writing with pen and ink. They wrote letters to family or long, illustrious entries in their journals. I imagine much of this was done in order to process life. If you look at their letters and journal entries–especially the more ancient ones–you’ll note the writing itself was like an art form.

Our handwriting today–not so much. My early training taught me better than my present skills. Sometimes, I can barely make out the items on my grocery list.

I blame it on non-use.

Do you still write letters? When I was growing up, we received an almost weekly letter from my grandpa in California. Now, remember, this was in the days prior to free long distance. They had to pay per minute to talk (scandalous, I know!).

Grandpa would write about his favorite baseball team–the Dodgers. Or he’d tell us about the latest brawl on the roller derby. As years passed, he talked about his experiences volunteering at a local hospital in L.A., where he met Betty White. This was a big day for Grandpa. Somewhere, there’s a picture of the two of them together. I’m not sure who ended up with that one.

By writing, those who don’t have computers can keep up with their loved ones, just as they did in ancient times. In the Old West, the Pony Express carried those letters, sometimes at great personal risk. Now we complain if the mailman is half an hour late on his route. We’re so accustomed to “instant send” we just don’t understand why it takes a week to received a snail post via regular mail.

In my latest release, Carlotta’s Legacy, Rebecca Lewis must communicate “across the pond” by letter. It took weeks, rather than days. They could pay extra for airmail, but the letter had to travel across the ocean first, and that was by boat. So if they had an emergency, Rebecca would need to send a telegram. Though limited by word count, this was the quickest way to send an important message.

So consider yourself blessed. We can send an email or Facebook message from wherever we are to someone on the other side of the world, and receive an answer within seconds (or minutes)–longer if they don’t have WIFI in their homes. Still much quicker than a letter or a telegram.

Maybe too fast! Be careful out there…