Welcome to my brand new, once-a-month feature page. First up, is fellow Kentucky writer, Ann Gabhart. Ann lives a life that some of us dream about. Her vistas include fields and woods instead of privacy fences and garages (my view right now). 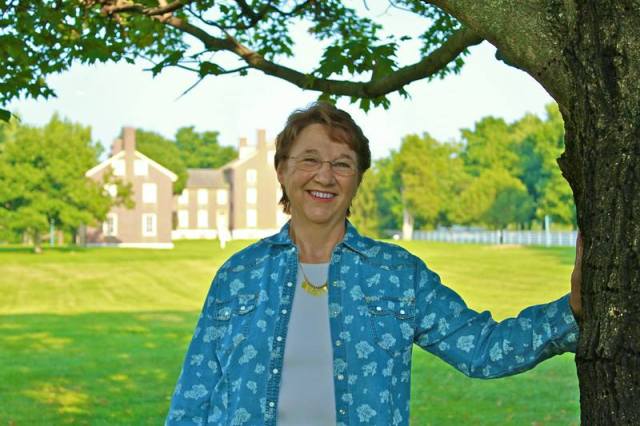 She often brings her Facebook followers along on her walks with her dog, Oscar. We get  the occasional glimpse at her heavily-populated bird feeder, or a lovely flower garden. You can follow along too, by “liking” her author page at https://www.facebook.com/AnnGabhart/.

Ann’s writing voice is often quiet and peaceful, like the land that surrounds her. But she has plenty of grandchildren to keep her young and vibrant. I love to check in with her, read her latest blog post, newsletter, or Facebook status. These often include pictures from her morning walk.

But enough about that. Ann Gabhart made a name for herself writing a different sort of “bonnet book”–Shaker novels. If you know anything about the Shakers, you might be surprised that she found a way to add romance to their lives.

I’m a big fan of her Rosey Corner books, and also the Hollyhill books. And the local historical novel, Words Spoken True, holds a permanent spot on my bookshelf.

But I am intrigued with the new cozy mystery novels she’s writing. Called “The Hidden Springs Mysteries”, these novels are also set in Kentucky. The first of those, Murder at the Courthouse, was published in October, 2015. [By the way, it’s free on Kindle right now–click the picture of the book to go there!]

About the book: After a few years as a police officer in Columbus, Michael Keane has no trouble relaxing into the far less stressful job of deputy sheriff in his small hometown. After all, nothing ever happens in Hidden Springs, Kentucky. Nothing, that is, until a dead body is discovered on the courthouse steps. Everyone in town is a little uneasy. Still, no one is terribly worried–after all the man was a stranger–until one of their own is murdered right on Main Street.

As Michael works to solve the case it seems that every nosy resident in town has a theory. When the sheriff insists Michael check out one of these harebrained theories, his surprising discovery sends him on a bewildering search for a mysterious killer that has him questioning everything he has ever believed about life in Hidden Springs.

Bringing with her a knack for creating settings you want to visit and an uncanny ability to bring characters to life, A. H. Gabhart pens a whodunit that will keep readers guessing.

I love the cover of the second book, Murder Comes by Mail — this one is on my TBR (to be read) list!

A Cozy Mystery Complete with a Small Town Full of Charming, Quirky Characters

About the book: Deputy Sheriff Michael Keane doesn’t particularly enjoy being touted as the hero of Hidden Springs after pulling a suicidal man back from the edge of the Eagle River bridge in front of dozens of witnesses–a few of whom caught the breathtaking moments with their cameras. But the media hype doesn’t last long as a new story pushes its way into the public consciousness of Hidden Springs’ concerned citizens.

Photos of a dead girl arrive in the mail, and Michael becomes convinced she was murdered by the man he saved. With a killer one step ahead, things in Hidden Springs begin to unravel. Now Michael must protect the people he loves–because the killer could be targeting one of them next.

Readers will love racing along with Deputy Sheriff Keane as the clock ticks in this page-turning mystery.

Next up, Murder is No Accident (available now for pre-order). This book’s official release date is March 14, 2017. From the back of the book: One body may be an accident. A second body means murder. 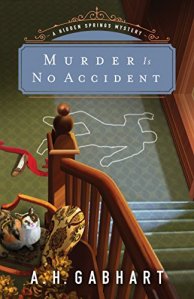 About the book: The old Chandler place should be empty. The magnificent Victorian mansion is for sale, even if its aged owner Miss Fonda doesn’t realize it. But when real estate agent Geraldine Harper enters the house on a sunny October day, she’s not alone. Minutes later, there is a body at the bottom of the steep steps leading to the tower room.

Deputy sheriff Michael Keane is called in. At first blush, it looks like the death was a tragic accident, but clues point to foul play. And when a second body is discovered, the race is on to find the culprit . . . before someone else dies.

If you like your small-town America sweet and quirky–with a dash of sinister–you’ll love this latest whodunit from deft storyteller A. H. Gabhart.

You’ll find Ann Gabhart’s books available at many outlets, including bookstores, Walmart, and Meijer. If you’ve never read one of her books, I urge you to get one today. Grab that free one on Kindle. I think you’ll be pleased.

Ann H. Gabhart is a bestselling author of many novels, including Angel Sister, Small Town Girl, and Love Comes Home, and several popular Shaker novels such as The Outsider, The Believer, and The Innocent. Ann grew up in a small rural town in Kentucky much like Hidden Springs, but she is happy to report nobody was ever murdered on her hometown’s courthouse steps. Ann and her husband still live on a farm near that same little town in Kentucky. Learn more at www.annhgabhart.com.

As always, thanks for stopping by my blog.