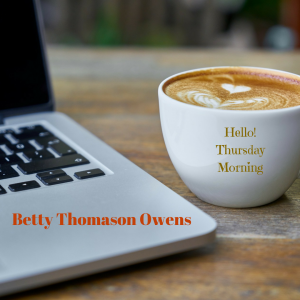 Is there anything better than that first sip of that first cup of coffee of the day?

On this first Thursday in September, I thought I’d share a little something personal. We’ve just celebrated Labor Day, which is the Forty-Fourth anniversary of a first date.

It wasn’t a traditional date, however. I wasn’t actually with the guy I ended up married to. But we were on the same date.

I guess you might be wondering what I mean by that. Well, I was on a double-date. It was sort of a double blind date. Now I know for sure you’re wondering about it. 🙂

At the time, I was living in Columbia, Tennessee. I decided to visit a friend (Pam) in Louisville, Kentucky, and I thought it would be nice to invite one of my Tennessee friends (Carol) along for the ride. When Carol and I arrived, Pam told us she had a date on Saturday night, and hoped we wouldn’t mind. Being a kind and very attentive hostess, she couldn’t leave us unattended, so had been trying to set us up with dates of our own.

I was dubious, especially when I heard she’d only been able to secure a date for Carol. How humiliating was that? Pam explained that most of her friends my age were in college or seminary. Since it was a holiday weekend, they’d gone home to visit family. That was her story.

Her plan was for us to go to an outdoor concert at the Iroquois Park Amphitheater. It was a Christian event, and was supposed to be really good.

Carol was shy. Really, really, shy. So she didn’t care if we just hung out in our hotel room for the evening. But Pam was persistent. Once she decided on something, she was going to make it happen.

Mid-afternoon, Carol’s “date” rang the doorbell. Pam confessed to me that he wanted to “get a look at” her before going out. Hmm…

I accompanied Pam to the door, and as it opened, revealing Pam’s friend, Bob, something happened inside my heart. Something like a little bell ringing. No, I’m not kidding—it really happened. Well, either that, or an alarm went off somewhere in the house. I’m sticking with the “bell ringing in my heart” theory, though I didn’t really pay much attention at the time, other than to note it.

The guy at the door didn’t ring my bell. No way. His hair was too long, he had a mustache and “chops” (long sideburns for those unfamiliar with that term). Way too much hair, y’all.

I will admit, he had a nice smile and a great personality. We were soon joined by his best buddy, Rick. I knew Rick from school. We’d sat across the table from each other in Physical Science class, and spent a lot of time laughing. The class was taught by one of the school’s favorite teachers, who liked to take us on nature walks in spring. The smokers liked those nature walks, because they were allowed to smoke.

Back to the double-blind-date in process: I suggested we go out with Bob and Rick, and it not be a real date, just four friends going to a concert in the park. The plan was accepted, so Carol and I returned to our hotel room to get ready, and wait for our “non-dates” to pick us up.

When they arrived, Carol and I headed out, but there seemed to be some confusion at the car. Bob was in Rick’s face in some kind of low-voiced discussion. I heard a few words.

Bob opened the door for Carol, Rick opened a back door for me. So far, so good. We arrived at the park, the concert in progress. We sat, Bob and Carol, me and Rick. Bob kept leaning forward and talking to me in front of Carol. I thought it a bit odd.

The next day, Pam took me aside (actually took me into the bathroom and shut the door so no one would overhear). She told me Bob liked me. A lot. And wondered if I was interested.

Gee. He was younger than me. He had a lot of hair. He wore raggedy pants. And really, really short shorts. Actually, those were once blue jeans that had frayed back to almost nothing. The pockets were longer than the shorts. His tennis shoes had holes in them, too. I know, it was the seventies, and it was the style, but I had never really liked that look. Still better than droopy pants, though.

Before I left town, he asked if it would be all right if he wrote to me. I said why not. I think I actually did say that. I was a big believer in God’s perfect will and God’s perfect timing. If God was in a thing, it would come about.

The rest is history, as they say. Bob and I married on December 21st of that same year. Yes, I know that was only a few months later. It was crazy. But don’t ask if it was love. Bob will tell you one thing, I’ll tell you another. That’s because he’s a pragmatist, and I’m a romantic.

All I know, is we’re still a couple and pretty happy about it. And we’re still friends with Pam. 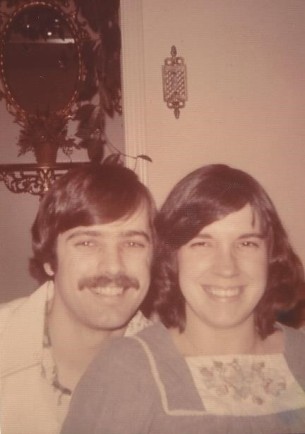 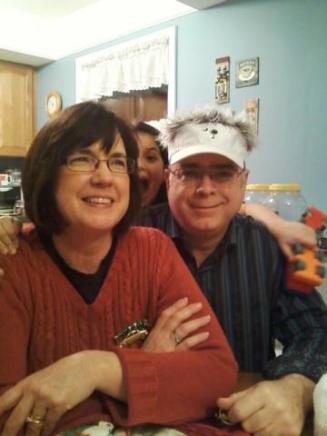 Christmas a lot of years later. 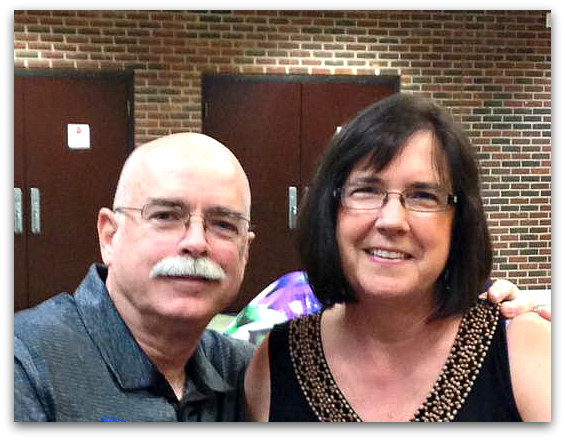 Not so much hair these days…