Recently, we spent a few days in Perdido Key, Florida, for some much-needed R&R. Four days and five nights, to be more precise. Some of the most visually perfect days I’ve ever experienced on the Gulf. And our first stay in Perdido Key.

We knew we were taking a chance, by going in October. The week before we arrived, it was rainy and overcast and cold. I watched the weather channel with bated breath. Would the weather warm up? Would Joaquin take a westerly turn?

Our first day there, it was sunny, but the wind held a definite chill.  The first thing I noticed was, the sand didn’t burn our feet. A definite perk. However, the sun was quite powerful. We had taken the necessary precautions, so didn’t suffer any burns to spoil our fun.

Sights! Our condo was well positioned to view the sun’s path. Out on our balcony, I witnessed the sun rising out of the water. In the evening, we watched from the beach as it set. Breathtaking.

Gorgeous, translucent water with no apparent jellyfish. I liked that, though I barely stepped in. Calm seas that sparkled in the afternoon sun. I could sit and listen to the surf for hours. I did!

Sounds — the Blue Angels. For me, this was not a deterrent. I enjoy watching them fly. They were usually high overhead, until evening when they returned to base. We just paused our conversation until they’d passed over, slowly. I heard the roar for several minutes after they’d gone.

I’d expected smaller crowds, but the building where we stayed is evidently a popular one–and not only that–it was fall break in some area schools. And the shrimp festival was on in Gulf Shores, just down the road. But honestly, we still enjoyed ourselves. No, we didn’t attend the festival. Not really into crowds, or shrimp.  But we did visit a few area restaurants.

The Shrimp Basket was having a problem in the kitchen on our first night in town. I don’t think they expected such a crowd. The wait-staff was helping in the kitchen, even washing dishes. It took over an hour to get our food. But they made it right by only charging us half price. Our waitress had worked so hard, we tipped her the full amount. We didn’t return there.

Typically, we like to have breakfast in our residence and sometimes lunch also. Then we go out to dinner. But we discovered a little jewel of a breakfast place called Triggers. They’re on Gulf Beach Highway, toward Pensacola. The parking lot held a lot of pickups with local Florida plates, so it seemed like a winner. It was. The eggs tasted fresh, were perfectly prepared (I’m picky!) and they can do grits and biscuits. Love.  We made sure to swing by there on our way out of town.

On the second day, we had lunch at Tacky Jack’s. I think they’re actually located in Orange Beach, on the bay or the Intracoastal. The views were amazing and it was a fun place, very colorful. My husband got out of the car and a woman dashed over, getting into his face. “You’re from Kentucky!” she said, “I suppose you’re a Wildcat fan!” He was a little alarmed, since she was a complete stranger and had literally entered his personal space. But he recovered quickly and let her know he does bleed blue. She was a Louisville fan, married to a Wildcat fan. Yes, it happens.

The food at Tacky Jacks…was just okay. Not great. Maybe we’re picky, since we come from a city known for it’s restaurants. I judge seafood by the hush puppies. These were small and cooked just right, but not so much on flavor.

I’m a hush-puppy fan, and here again, I’m picky. The perfect hush-puppy should be small, so it cooks all the way through without drying out. If it’s too big, the center will be doughy or the thing will be a belly-bomb, dry and tasteless. I like them with onions and…flavor. I don’t really like them sweet.

We enjoyed the Perdido Key Oyster Bar, mainly because of the view of the beautiful Intracoastal Waterway, lined with high-end houses, and the Gulf State Park across the water. Lovely. The food was pretty good. Jellyfish (a restaurant, not the animal) was a fun place. It’s a sports bar. Hubby tried the sushi, but found it sub-par (in his opinion). I took a chance on the Jack Chicken Salad: bourbon-glazed chicken over greens with fried green tomatoes, candied pecans, blue cheese, bacon croutons, tomato bacon jam, and peach bourbon vinaigrette. So many wonderful flavors. It was delicious. 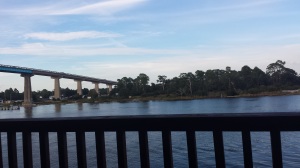 We saved one area restaurant until last. The guy at the deli counter in the local Publix (grocery) told us about a little shack of a place tucked up under the Theo Baars Bridge, called Fisherman’s Corner. Funky little place looks unassuming, but it was a winner. Not your run-of-the-mill seafood diner. They know how to do it right and I loved the New Orleans atmosphere and Creole flavors. I’m giving it four stars. Yum.

If you’re looking for a new place to go on your next Florida vacation, you might try Perdido Key. It is a very beautiful stretch of beach. And there’s lots to do in the area. It’s well-positioned between Gulf Shores and Orange Beach on one side, and Pensacola’s only about thirty minutes to the east. And if you’ve a golfer in the family, there’s an Arnold Palmer designed course in Perdido Key. I’ve heard it’s “not-to-be-missed.”

As the sun set on our final evening on the Key, I snapped a few pics and breathed in the warm, tropical air. In a few hours, I’d be back in the nation’s midsection, which was already experiencing low temps and bracing for their first official frost. The only bad thing about going to the beach this time of year? You can’t show off your tan when you get home. Every inch of skin is covered, trying to stay warm. 🙂