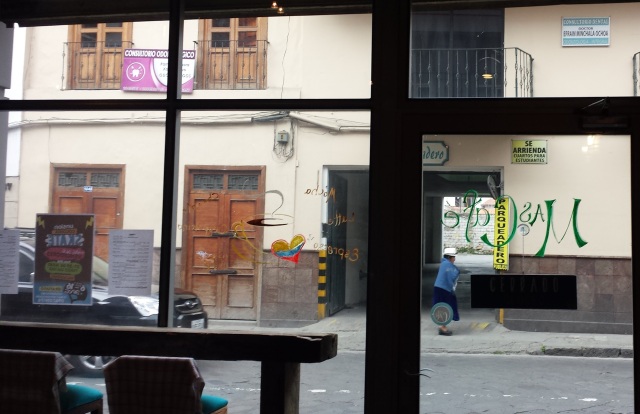 I’m writing this post from the coffee shop at Unsion Television in Cuenca, Ecuador. It’s quiet at this hour, but will soon fill to capacity. We’ve had a wonderful week so far in Cuenca. I’ve been busy talking about Annabelle’s Ruth, speaking at various locations and teaching a workshop on creative writing. It’s been a great experience. I’m so thankful to our dear friend, missionary Bill McDonald, for the opportunity.

Meanwhile, my team members have been busy working. The guys are helping Mario renovate the television studio upstairs. They love Mario, whom they dubbed “Super Mario.” April is working here in the coffee shop, alongside our beloved Rocio Romo Ortiz. Rocio is gracious and funny and tends to “adopt” her helpers as family. I loved her smiles and hugs and wonderful cappuccinos. 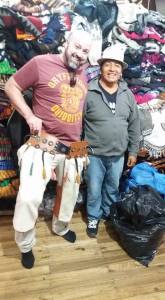 Later today, we’re headed to the marketplace to find gifts for our family and friends. The picture to the left is of a vendor we met. My son, Todd, tried on a pair of too-small gauchos, just for fun. They may fit the vendor, but not my big ole gringo son.

And of course, I have to show you the world-famous flower market. Their prices are low and the flowers are amazing. You can smell the place a block away. 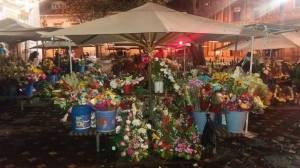 I’ve been impressed with Cuenca. The people are kind and generous and hard-working. Most of what they do is done by hand, the old-fashioned way. We’re staying in the old downtown area with its cobblestone streets and amazing mountain views.

The hotel was once the home of a well-to-do Spaniard. It has the inner courtyards and patio, though a glass roof has been added to protect from the elements. It does tend to rain more often this time of year. And though it gets quite chilly at night, they don’t have heat. They don’t have air conditioning, either. I don’t think they really need it, since it never gets really hot here.

If you go to Cuenca during their winter, take your flannel PJ’s and socks. You’ll be glad you did. They are in the mountains, after all.

Speaking of mountains,  the trip over the Andes from Guayaquil (locally pronounced “why-a-keel”) to Cuenca was … an experience. We piped around hairpin turns to find anything from gigantic boulders in the road, llamas, or small herds of cattle. At one point, Bill jumped out to help recapture a runaway cow.

The bathrooms were an adventure as well. A little on the primitive side, and you can’t flush paper. 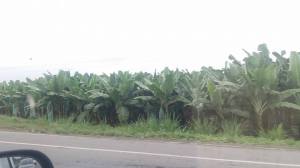 Before climbing into the mountains, we passed banana groves, cacao groves and rice paddies. Yes, rice is a staple here, along with the bananas, plantains, potatoes called “papas” and yucca root, which they fry like french fries, or boil.

Bill stopped to buy us a bunch of small bananas called “oritos.” Large bananas are oros, which means gold. The oritos were delicious and the potassium helped us make it through those hills and curves.

The city of Cuenca lies in a valley that resembles a bowl. The altitude ranges between 7,710 to 8,370 feet. That’s higher than Denver–it took us a couple of days to settle in. We walked slower. Even the process of getting into bed at night made me wheeze.

The long name for the city is “Santa Ana de los cuatro ríos de Cuenca” — since there are four rivers which are part of the Amazon watershed. This place has been around for a long, long time. It was originally founded in April, 1557 by the Spanish. I noticed a definite mix of Spanish and natives among the citizens of Cuenca.

As you walk down the streets of the city, you’ll notice many who are dressed in traditional clothing. They’re not wearing costumes. This is their everyday wear. Many are Quichua (Kichwa), but may also be Huaorani, Shuar, or Chachi. They are polite and friendly and very patient, for the most part. They zip along the inner city sidewalks along the narrow cobblestone streets, headed to market or who knows where. Some of them have booths in the marketplace, where they sell handmade textiles, hats, and jewelry or other crafts.

Next post, I’ll have more to share, after we’ve visited the beautiful cathedrals and vistas. In the meantime, ¡hasta la vista! ¡Dios le bendiga!